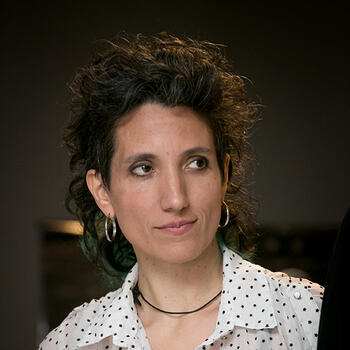 Paula Otegui is a painter from Argentina. She lives and works in Buenos Aires.

She earned her BA in Visual Arts in the National University of the Arts (IUNA), Buenos Aires. She served as faculty member at IUNA, both as Associate Professor and Assistant Professor for the Teachers Training Program in Painting.

Most recently, in 2017 has done residency in Velazquez House, Madrid. She obtained subsistence Scholardship (2013-2014) awarded by the Pollock- Krasner Foundation, also Financial assistance for a solo exhibition in Bs. As. for the Metropolitan Fund the arts and sciences from the Ministry of Culture of the Government of the Autonomous City of Buenos Aires, and the National found of Arts.

Her works are also included in private collections in the following countries: Argentina, Spain, Colombia, U.S.A, and Italy, England, among others.

My works seek to develop the notion of space. A notion which is crystallized by juxtaposing layers that enable the pursuit of paths and trajectories.

The visual proposal comprises the coexistence of differing situations and places occurring in the same plane, creating a reality within another reality, overlapping settings and generating an interconnection with distinct scenes, “[…] as in writing about what has been written, which calls for a different reading […]”[1].An attempt to seek out the hidden side of meaning, a quest for another interpretation of the experience.

In so doing, my work denotes the idea of collage, not in the technical sense but rather as impacting a surface, as cutting and pasting in the virtual world.

My works tell stories. They depict my own experiences as well as historical and cultural experiences; they are metaphors about time, about the human condition, about memory. The past, present and future interrelate thus creating “[…] a construct of heterogeneous and discontinuous times, yet connected and intertwined (…)”[2]. I draw attention to questioning or rethinking experiences typical of those who live in contemporary cities.

The process of setting in motion my artwork begins by creating small scenes that later become intertwined, like obstacles (ones of others) hampering the view of full landscapes. This grants the image a fragmentary, complex and baroque nature expanding towards the infinite, and resulting in an imprint of certain disintegration.  The parts make up an unlimited whole. My aesthetic and plastic proposal is to work with the notion of wholeness and fragments. Fragmentation is formal, material, conceptual and dialectic, ranging between construction and deconstruction of its surface, since fragments do not adjust to each other; they have unmatched edges and are more a result of randomness than pieces to a puzzle.  The reconstructive exercise is coupled with overlays witnessing perceptual complexity. Figurative, abstract, geometric patterns and spots are overlapped, creating a complex visual mesh where the gaze is overwhelmed with content.

The constant overlaying of resources and figures generates an ambiguous relationship between two and three dimensions, between figure and background; these are self-referential, alternating their denoting condition. Spatial illusionism coexists with planimetric colors.

Each artwork is a fragment of a world created with great awareness of the real. A world full of heterogeneity, generous, offering myriad possibilities.

Fantasizing about having the viewer travel the universe in an instant, I pose a time where all things happen simultaneously, with a clear intent to draw the Universe and understand it as “[…] everything there is, [and represent] each thing as it is, opposed to and together with the rest of things, […] included within all things as a whole, […][3] and how these show themselves in the universal existence. “Real physical or psychological things, and also unreal, ideal and fantastic ones […]”[4] In creating those worlds where, at times, they acquire connotations relating to the obscure, wild, violent and dangerous, conflicts flare up again when all that which occurs in the outer world settles within the Other:  This is no longer about the risk of living but rather experiencing daily uncertainty, noticing the impossibility of thinking the inside without the influence of the outer world. I can be that Other each time, in each new journey.  The Other refers to all that which is not me; it is the outside […][5].

Within those spaces rife with tensions, deconstruction seems to embrace my works, when posing conceptual contradictory pairs: natural/artificial; black/white; line/spot. My artwork recreates natural and urban landscapes where ornamental motifs communicate with materials typical of consumer societies.  Works represent urban remains, precarious housing, skies, water, land, vegetation sprouting from walls; graffiti, signs, cars…A conceivable interpretation of the contemporary Kosmos and Kaos.  “[…] Deconstruction delves within that controversial field, in such heterogeneous space where conflict of forces and senses lies […]”[6]. ¨Destructing or decomposing, even displacing structures that uphold the conceptual architecture of a given system or historical sequence, shaking its foundation, uprooting it […]”[7]

Different constructive orders are suggested in my works; the keys I offer for their reading are countless. Ever since I started developing these series, I became interested in untangling the recurrent appearance of binary oppositions comprised in the Western thought.  Rural/urban, right/left, sacred/secular, life/death, love/hate, this is how we classify experience to give it meaning: radically, ruling out infinite intermediate instances. These extreme situations bring about clashes.

Nature is always present in my artwork, exuberant and sensual, in constant change and motion, accumulating complex and divergent elements. Something growing and stacking up somewhere; something dying elsewhere; everything starts anew.

The individual is diluted in the anonymity of the crowd and landscape chaos. Each art piece seems to enclose or condense a particular and definite space where the unfolding situations and their protagonists appear to be suspended. The aim is for the viewer to find him or herself in that same maze, until becoming the Other, a stroller in those deceitful parks where entrances and exits, days and nights get muddled up.